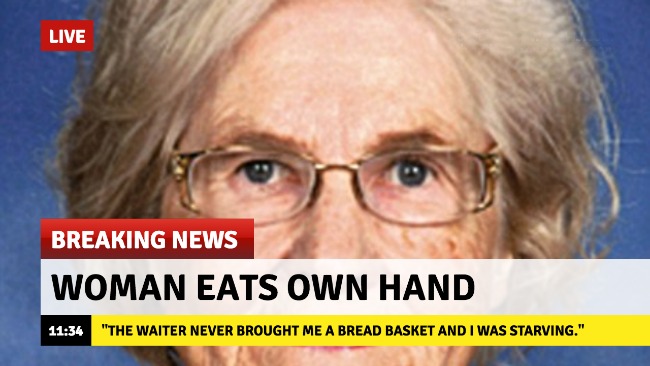 An elderly woman in Amboy, Indiana is in stable condition after reportedly eating her own hand while at a restaurant. Reports say that Ruby Thomas, 84, was at a local diner when the incident occurred. After sitting at the table for approximately 4-5 minutes without receiving the customary complimentary bread basket, Thomas took matters into her own hands. Literally.

“The waiter never brought me a bread basket and I was starving,” said the woman. “What choice did I have? My blood sugar was dropping and with this heat dome happening, I didn’t want to take any chances that I might pass out.”

Her waiter, 23-year-old Curt Spencer, was reportedly out of the dining room at the time of the self-cannibalization. “I was just in the bathroom for a little bit. I didn’t even know she had been seated. I come out and I see this old lady eating her own hand and I’m all, damn, that bitch is hungry!”

Paramedics were called to the scene as well as a bus boy. As she was being wheeled out on a gurney, she was heard griping about the slow service and threatening to never come back again. Cashier, Emily Bloom says this is not the first time she has made this claim. “Every week she comes in her and complains about something and every week she tells us she’s never coming back. Maybe this time she means it. I mean, I dunno how she’s even gonna feed herself now.”

Thomas is expected to recover although she now only has two fingers and half a thumb. No word on how much the busser was tipped to clean up the extra mess.

13 thoughts on “Woman Eats Own Hand at Diner”