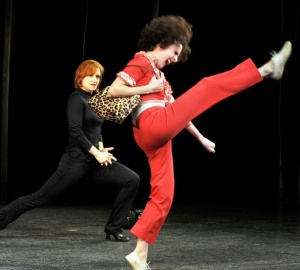 I certainly don’t enjoy repeatedly stepping on someone’s foot or kicking them in the shin every time I walk past their table. However, sometimes these things happen and they simply can’t be avoided. Well, actually, it could be avoided if that someone would just keep their fucking legs underneath their table instead of out in the goddamn mother fucking aisle.

I wait tables in the dark. It’s true. I have developed a keen cat-like vision that allows me to navigate through a crowded room with only the tiniest bit of light. I cocktail in a cabaret venue, so the only lights are the ones that are focused on the singer. Yes, it would be nice to have a special or a spotlight that followed me so I could see where I was stepping, but that’s just not how it is. I deal.

Last night, a woman at Table 3 seemed unable to keep her legs anywhere other than the lone aisle that I have to walk through in order to get to every other table in the room. She was wearing black pants and black shoes and when you take into account that there is no light, you can see why it was easy for me to kick her three or twenty times. You would think that after the first time I accidentally stepped on her toe she would have some thought mechanism that would tell her maybe she should move her feet out of the fucking way. She had no such thought mechanism.

After the show was over, I was walking in the aisle and I tripped on her enormous feet. Again. I stopped and said, “I know I hit your leg a few times during the show, I’m so sorry.”

That was her cue to say something like, “No it’s my fault. I have no manners and don’t respect you at all and coupled with my abnormally large feet, I have been a nuisance to you all night. Please forgive me.” Instead she said, “Yes, you hit me three times. The third time’s the charm, do I get something?”

Bitch, I hate you.

I laughed my fake ass laugh and said, “I know, I’m sorry, but I just couldn’t see. And this is the aisle. That I walk in.”

She countered with, “Well, my friend didn’t want me to have my feet under the table because I was kicking her, so I had to put them in the aisle.”

Excuse me? Her friend is just sitting there and not walking. And why is this woman kicking her friend? Does she have restless leg syndrome or some involuntarily tic that makes her leg bounce around?

“Well, this is the aisle though. I have to walk here.”

Then she asked me where she was supposed to put her legs. What the fuck kind of question is that? You put your fucking legs under the table and deal with it. If I had my druthers, I’d have them both amputated at the knee and then shoved up her ass, but I suggested that next time she sit cross-legged Indian style and then laughed my fake ass laugh.

“Oh, well maybe ten years ago I could have done that. But not anymore.”

Like I really expected her to do that. It was a joke. And looking at her, the only thing she could do ten years ago that she can’t do now is control her bowel movements.

I gave up. Show over. Scene complete. Don’t care. I hope she had bruises on her knees from me hitting her all night, but she probably didn’t. Her knees are more than likley all calloused from the bathroom blow jobs anyway.