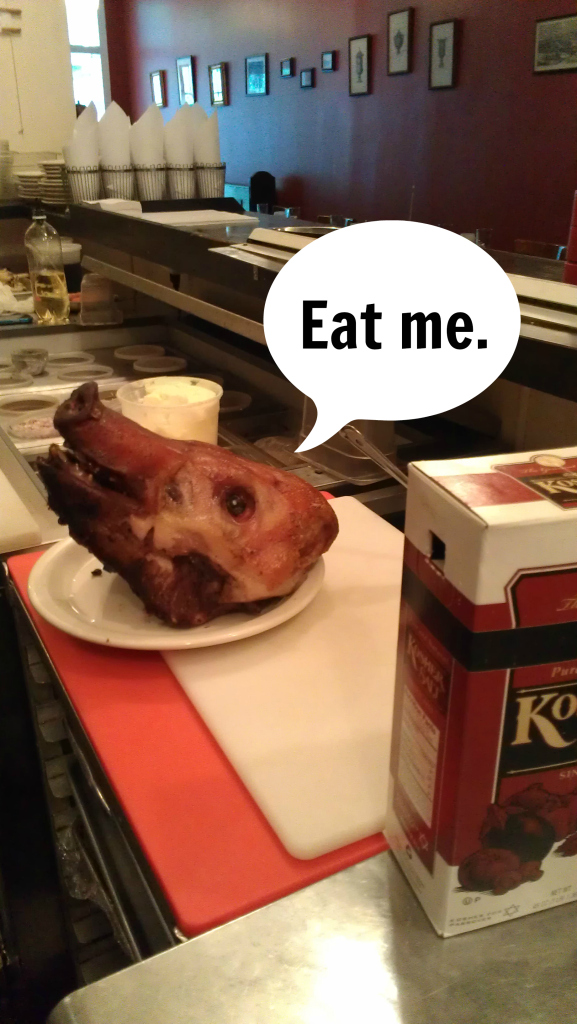 I always arrive to work knowing there is a shift meal waiting for me. Most of the time, I eat before I get there in case the meal is something that I would rather not ingest. I have learned that Juan takes it very personally if anyone eschews the meal he hasprepared for us and it’s easier to simply take it whether I plan on eating it our not. With trepidation, I look over to the kitchen to see what combination of leftover slop and about-to-turn foods will be thrown together and presented on a plate as our family meal. Sitting on a plate behind the line is the most awful shift meal I have ever seen. I don’t typically like my food to have the ability to look back at me, but this one wasn’t only staring at me, it was haunting me. It isn’t a plate of pasta or even a whole fish. Today’s shift meal is a pig head, complete with snout.

Juan puts his hands on the mouth of the pig and moves the dried crispy lips. “I’m very good. Yummy.” He laughs at his own joke as the nose of the pig falls off the face and onto the cutting board. Juan quickly replaces the snout and continues on with his sick ventriloquism act. “Ouch, my nose hurts.” He laughs at his own joke as he pets the pig’s head as if it were a kitten. “Good, no?”

“No. I think I’ll pass today, thanks. I’ll swing over to the deli and get a Cliff Bar or a banana or maybe I’ll just eat a roll of paper towels because I am not eating a pig head. Where did that come from?”

“The Chinese grocery” chimes in the manager. “I bought it for us today.” He says this with pride as if he is presenting us with free iPads, blank checks and chocolate.

I realize that this pig’s face was once attached to bacon which is quite tasty when mixed into an omelet if you can forget that the egg came from the ass of a chicken that is crammed into a coop with 11 other hens who are wallowing about in their own feces. I like ham sandwiches and pork chops but I do not like seeing the teeth and whiskers of the animal from which it came. I am a carnivore, but I am one of the millions of people who like to pretend that my meat comes from an animal called a hamburger and that chicken fingers grow on trees like plums. It is not rational for me to think this way but this is why I will not eat any meat with bones in it or the the dark meat or skin of a bird. Any reminder that my meal was once something that I could potentially have had as a pet must be erased before I can enjoy eating it. How can I be expected to take pleasure in veal parmigiana if I allow myself to imagine what that young calf was like as it was force fed whole milk and heavy cream while lying in a cage? Just put some extra sauce and cheese on it and cut the bone out for me, please.

A few minutes later, Juan confirms with me that I will not be participating in the family meal.

“No, I don’t want to be a part of this family. Consider me an orphan today. I’d rather eat gruel.”

“Yeah, gruel. Like porridge? It’s what Oliver wants more of? Oh, forget it. No, I don’t want pig head today.”

“Is good head,” he assures me.

He begins to plate the food for the others who are looking forward to having a face to face conversation with their lunch. I watch as he slices the forehead into thin slabs of “I can’t eat that shit.” I hear that someone wants to eat the cheeks and that the tongue tastes like bacon and I can’t tell if they are being funny or if they actually want a tongue, lettuce and tomato sandwich. The forehead is served with cous cous and salad and it’s the first time I have ever seen cous cous be the most appetizing item on a plate of food.

Once the head has been picked clean, it goes into the trash can. Juan places it in the garbage carefully and with great deliberation. It’s as if he is showing respect for this pig that has fed him so well but he informs me that he wants it facing up so that when the late shift gets in it will freak them out when they throw something away. “Adios, piggy piggy,” he says as he walks away from the garbage can. I walk over and look into the can. The pig is staring right at me and I am surprised that the eyeballs are still there. Didn’t someone want to freeze them and have them later as garnish for a bacon infused martini? I take some paper towel and cover up the head, partly out of respect but mostly because I don’t need to see some pig giving me the once over every time I throw away a napkin.

I relish my peanut butter Cliff Bar and begin my shift. But I can’t help but wonder what this Cliff Bar would taste like with bacon bits in it.