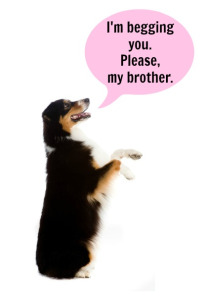 At the club I work, there is a two-drink minimum. That’s just how it is at certain music venues in New York City and ours is no different. We tell the customer when they make the reservation, the hostess tells them when they arrive, it’s written on their seating pass and I tell them again when I take their order. It should be pretty clear. I can tell Table 31 is going to be a problem just by the way he doesn’t want to sit where we have seated him. When a customer gets to the club two minutes before showtime, their seat might not be good as someone who arrived at the recommended 30 minutes before showtime. As I take the drink order for him and his friend, I remind them that at some point during the show they can let me know if they want another round or something else entirely. They order a coffee and a seltzer.

“And I guess we will just have to figure out what else we want to order since there is this two drink minimum thing.”

Throughout the show, I notice they are barely drinking their beverages. After passing by their table several times I decide that since they aren’t drinking alcohol I am going to let the two drink minimum slide. Five minutes later, Mr. Coffee wants my attention. I can tell he wants it by the way he is waving his arms overhead as if he is stranded on a desert island and he sees a plane flying overhead. I make eye contact with him and head across the room to see what he needs. He continues to wave his arms until I am within six inches of him.

“Another coffee,” he says as he holds up two fingers.

“Two coffees?” I ask looking at his two fingers.

“No, just one'” he tells me as he continues to wave two fingers at me. Maybe he is giving me the peace sign, I dunno.

I add the second coffee to the check and when the show is over I give them their bill, which has two coffees, one seltzer but no cover charges because they are guests of the performer. Remember, I could have forced a fourth beverage or rang in a minimum charge but out of the goodness of my bloated black heart, I do not.

He gives me his credit card but then comes to find me a few minutes later to question his bill.

‘Why are there two coffees on here?”

“Because you had two coffees.”

“Can’t you count that as a refill?”

Suddenly he gets desperate.

“I’m begging ya, please. Please, my brother, I got a hundred dollar parking ticket today. I’m in a rough spot. I’m practically on the streets. C’mon, take one of the coffees off the check.” He points at the two coffee charges, tapping them repeatedly with his finger as if doing so will magically void them off. “Right there.” Tap, tap, tap. “Right there. Take it from $11 to $5.50 and then I’ll just pay you that in a tip instead.”

(Yes, our coffee is $5.50 a cup. Why? Because it is hand roasted by Peruvian children who grow each bean and take care of it as if it’s their own child. The coffee is brewed using water that comes from a glacier and we don’t use just any old coffee filter. Our coffee filters are made by specially trained Black Widow spiders who weave them out of fibers of organic cotton that we grow in Central Park. We then serve the coffee in golden goblets from the Renaissance period that are on loan to us from the Metropolitan Art Museum. Naaa, not really. It’s a New York City cabaret room. Shit’s expensive.)

“C’mon, my brother. Take off one of the coffees and let me tip you extra big instead. I’m begging you.”

I cannot understand how giving the $5.50 to me instead of the club is going to make his financial situation any better.

“I’m begging you man, I can’t afford the three drinks. Take a coffee off and I’ll tip you real big. Cut me a deal. I’m in a rough spot. I’m practically living in my car.”

“I already did cut you a deal. We have a two-drink minimum so you guys should be paying for four drinks, but I only charged you for three.”

He finally relents and pays the check which has a grand total of $17.87. He leaves me a $3.00 tip, which I am totally satisfied with.

“Thank you, my brother. You have a great night.”

I watch as he heads over to his friend the musician and they make plans to go out for a cocktail.

My thought is this: if you are in such a jam and you are almost living on the streets or in your car because you can’t afford rent, then maybe you shouldn’t be going out to music venues to hear jazz. Maybe you shouldn’t be making plans to go out for cocktails. Maybe you should sit your ass at home and eat some Ramen Noodles that you make in a hot pot. Or maybe you should go to McDonald’s and lift some ketchup packets and mix them with hot water for some cheap-ass tomato soup. What you should not be doing is begging your server to give you free shit. It’s pathetic.

The bartender hears the whole story. “Was he for real?” he asks. “What a dick.”