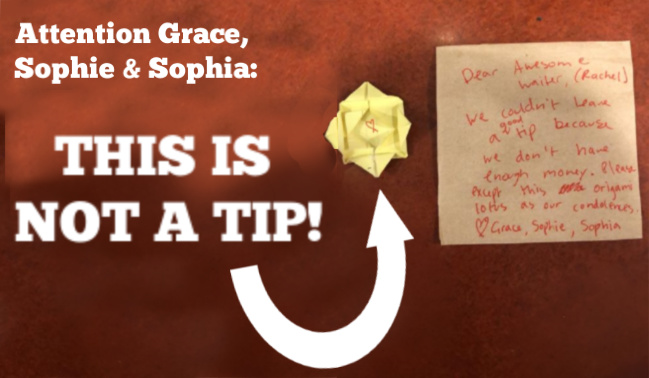 I am writing this letter on behalf of your awesome waiter (Rachel). You remember Rachel, don’t you? She’s the one who served you guys and then in return you left her a little note and an origami lotus flower. The reason I am writing this instead of her is because Rachel’s job probably prohibits her from discussing on social media about what goes on at her restaurant. Or maybe Rachel is simply a mature human being who doesn’t bother sinking to your depths. Lucky for you, I am not prohibited from speaking about it and I am also 100% immature.

Allow me to refresh your memory as to what you wrote in your note:

We couldn’t leave a good tip because we don’t have enough money. Please except (sic) this origami lotus as our condolences.

I will ignore the fact that you don’t know the difference between “accept and “except” and just chalk that up to good ol’ fashioned stupidity. I also question your use of the word “condolences.” I don’t think it means exactly what you think it does. In addition, I would like to point out that you added the word “good” to your note when describing the tip which clearly implies that you know a folded up piece of paper with a tiny heart drawn on top of it is anything but a good tip.

Girls, what the hell was the note and origami for? You know it isn’t going to help Rachel pay a bill and she certainly isn’t going to be able to tip out a portion of it to her busser. The only reason you left the note was to make yourselves feel better about stiffing a server who you claimed was “awesome.” Rachel doesn’t want your note. In fact, I venture to say that 99.9% of servers don’t want it.

Here is what we do want: a tip. Something that spends. And if you go into a restaurant knowing you don’t have enough money to leave a tip, then please do your server a favor as soon as you sit down. Tell your server you don’t plan on tipping. I know, I know, it takes a lot of courage to be this open and honest with your server, but isn’t it more fair? Maybe Rachel could have spent her time getting more lemon wedges for another table instead of for your cheap asses. Servers live on tips and if you’re not going to leave one, we should have the option to ignore the hell out of you. Sure, we’ll still bring your food and fill your water (one time) and bring the check, but we’d rather do that for someone who might appreciate the service. Leaving an apologetic note at the end of your meal is cowardly and you know it, girls.

Grace, Sophie and Sophia, I hope you see this. And I hope that someone you know sees it too so they can tell all of your friends how cheap you are. No amount of folder paper flowers or little drawn hearts is going to change the fact that the three of you are exactly the kind of customer that so many servers dislike. Grow up and tip. Or at least be honest with your server. We don’t have time for this bullshit.