I had no plans to blog today, but sometimes something falls right into my apron just like a piece of ice does every once in a while and I am forced to pay attention to it. I give you Nancy Goodman. 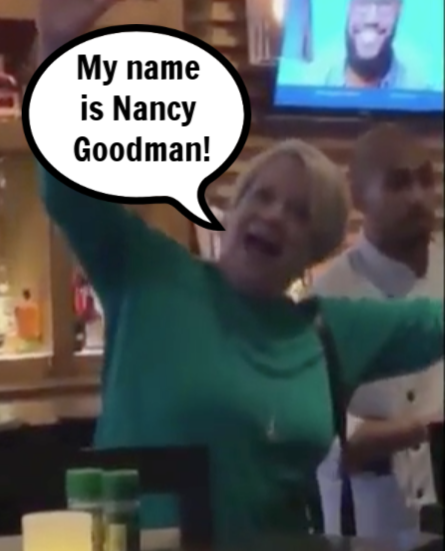 According to WRAL TV in Raleigh, NC, Nancy was none too pleased with two African-American women who were dining at a Bonefish Grill because in her opinion, they were too loud. So Nancy took it upon herself to go tell them to settle down and in the course of not minding her own damn business, she called one of the women the n-word. Of course, it was caught on video because it’s 2019 and if you’re gonna pull some bullshit, racist behavior, you better know someone is gonna record your racist ass.

Once the video made the rounds on social media, WRAL tracked down Nancy to interview her and Nancy doubled down on her behavior.

“I used that word because they forced me into it,” she said. She also said she would use the word again and that she’s not sorry.

That’s where I come in. I want to share the hell out of this video so Nancy will learn that there are consequences to her behavior. Yes, we have freedom of speech in this country but that doesn’t mean that you can float through life and say anything you want without any residual effects of your overall shittiness.

When Nancy chose to use the n-word, she took the situation in a different direction. If she would have called the woman a bitch or an asshole or an ignoramus it wouldn’t have made the news, but she decided to turn it racial. (I also wonder if Nancy would have thought two white women were “too loud.”)

I hope this video gets shared thousands of times so the next time Nancy is making her way into a restaurant, someone who works there might recognize her as the racist lady from the Internet and decides to refuse service to her. Restaurants do have that option, you know, and that would be just the kind of consequence that Nancy Goodman would understand.

You fucked up, Nancy. And then you fucked up again when you didn’t apologize. I’m sorry you have “tremendous anxiety,” but I hope you enjoy your Internet fame. Consequences!