The year 2019 is barely three days old, but it’s already the same ol’ dumpster fire that 2018 was. Well, at least that’s the case for a Waffle House in Louisville, Kentucky. Video has surfaced that shows what happens when a customer gets rude to a Waffle House employee and that employee has a stack of plates in front of her with absolutely no fucks to give. Although technically, this happened in 2018, it’s quite possible it happened after midnight which would make it the new year. Either way, it confirms there’s a fine line between 2018 and 2019 and that line is drawn with syrup and then sprinkled with broken ceramic plates.

A line cook from another Louisville restaurant, Aldwin Baylon Maninang, went to Waffle House on New Year’s Eve and captured it all on video. It is unclear where the tension began, but this being a Waffle House, it could have been anything from “this waffle is too expensive” to “bitch, did you just steal my false teeth?” to “hey, it’s Monday at Waffle House, so let’s trash it.”

Here are my favorite highlights from the video:

:03 when the employees in blue says “I don’t give a fuck” to the customer in the white hoodie.

:07 when the big dude behind her throws something that may or may not be a bottle of mustard or a hamburger bun.

:13 when the customer in the white hoodie throws a plate

:14 when the female customer in white hands the mustard/bun back to the big dude who promptly throws it right back at the customer in the white hoodie.

:18 when the employee in blue throws a plate at white hoodie guy.

:18 when the big dude throws what appears to be a bottle of ketchup at hoodie dude.

:24 when other customers decide this drama is not worth a waffle and start to leave.

:29 when employee in blue says “nobody throws shit at me.”

So many wonderful things are squeezed into these thirty seconds, but the hero in all of this, other than Aldwin for filming this masterpiece, is the guy sitting at the counter in the black cowboy hat. At the :19 second mark, he’s hit with a piece of flying debris and that mother fucker doesn’t even flinch. I love how at the end of the video, he wipes his mouth and is ready to keep on eating. Nothing bothers him. 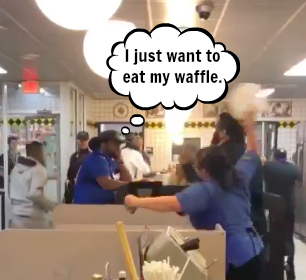