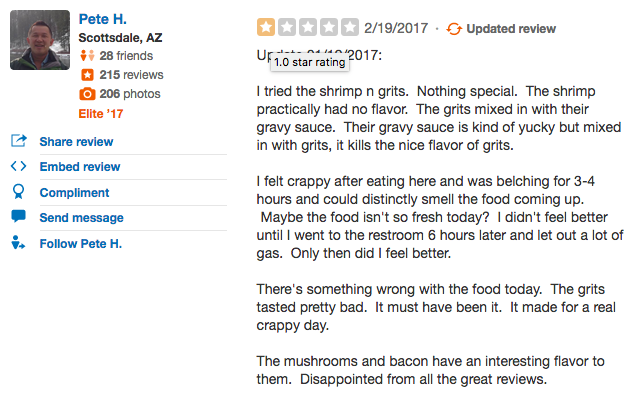 You know I loves me some Yelp reviews, especially the 1-star ones where the reviewer has a stupid reason for giving one star. Well, today’s review is slightly different. Pete H. went to Pine State Biscuits in Portland, Oregon and thought the shrimp and grits was “nothing special” and the gravy “kind of yucky.” He is certainly entitled to his opinion and since he is an “Elite” member of Yelp, apparently his opinion is more important than anyone else’s. What I find interesting about Pete’s review is how much unnecessary information about his bodily functions he inserts into it.

“I felt crappy after eating here and was belching for 3-4 hours and could distinctly smell the food coming up.”

Okay, that’s gross. Just reading about him smelling his own burps makes me want to throw up. And trust me, when I throw up, I will not be writing a review about what it smelled like.

“I didn’t feel better until I went to the restroom 6 hours later and let out a lot of gas.”

And now he wants to let us know that he sat on the toilet and farted a lot? C’mon, Elite Pete! A simple “the food didn’t sit well with my stomach” would have sufficed, but now anyone who reads your review is going to have to picture you grunting out a biscuit? Sometimes, less is more, but Pete seems to think that since he is an Elite Yelp reviewer, he needs to give us every detail about his gastrointestinal disorders. Why stop there? Why not tell us what kind of toilet paper you use and then snap a picture of your stool and link it to your Instagram? Or better yet, you can write a review about your poop! Was it a floater or a sinker? Did it break apart? What shade of brown was it?

It seems that Pete is accustomed to sharing too much information on Yelp. Take this review for OHSO Brewery where he writes, “We both had gas a few hours after eating here.  And in fact, we both had gas all through the next day.  I had diarrhea from this and felt better after I went to the bathroom.”

Ugh, stop it. Stop telling the world of Yelp about your gas. Take some Imodium and step away for the laptop, Pete.

And what about this one for a place called The Larder + The Delta: “The braised pork belly sandwich gave me a bad grease headache. The kind you get from eating cheap grease such as hot dogs or cheap pizza. Plate was loaded with tons of grease.”

I have never heard of a “bad grease headache” and I wonder if it’s akin to brain freeze when you eat ice cream too quickly. And by the way, Pete, if you go to a restaurant that literally has the word “lard” in the name, you’re probably going to be eating some fucking grease; cheap, expensive or otherwise.

I can just hear Pete ordering his hot dog at the baseball stadium. “Yes, is the hot dog made with your finest grease available or is it your standard run of the mill cheap grease?” Bitch, please. It seems like the bigger problem here is your digestive tract. If everything you eat gives you headaches, gas and the runs, maybe you should stick with bland food and ice cubes. Nobody on Yelp gives a flying crap about your flying craps.

2 thoughts on “Man Repeatedly Shares TMI in His Yelp Reviews”