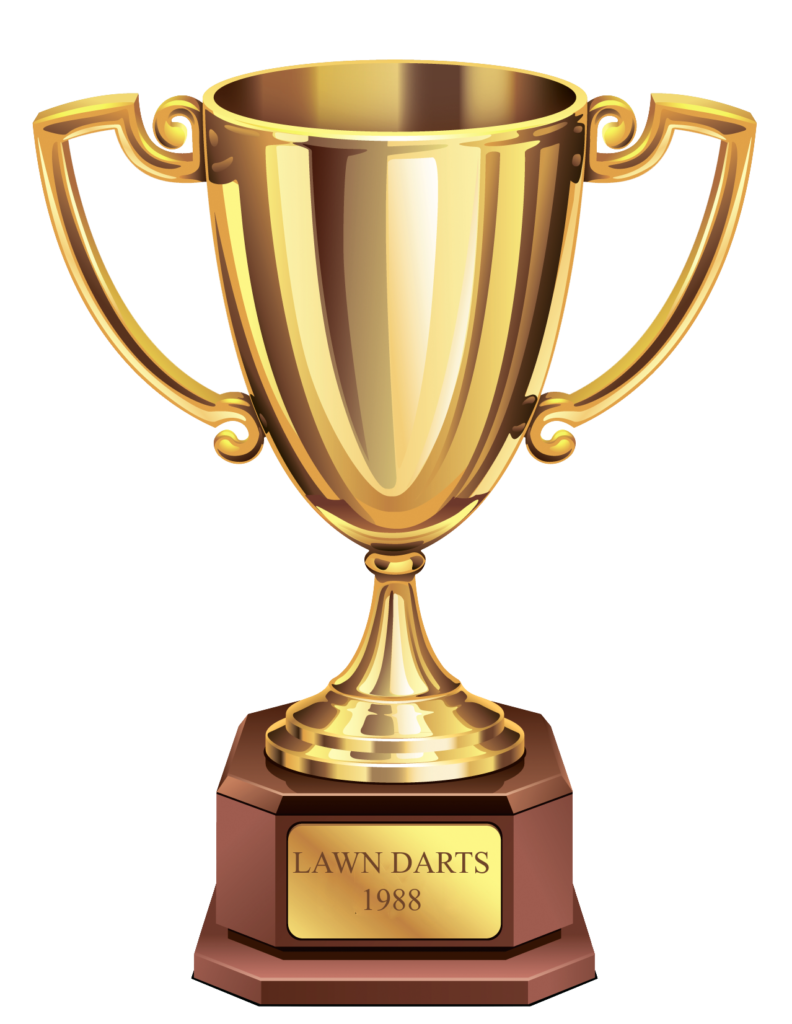 There was some drama over at Doug’s Donuts Diner and it involved a trophy that had been prominently displayed in a glass case ever since 1988. The case was specially built for the trophy which sat on a turntable and had a multitude of spotlights aimed directly at its golden features. The restaurant staff won the trophy when they competed in a town wide event that pitted businesses against businesses and they defeated their rivals at the Pizza Bucket Hut in a fierce lawn dart competition. Weeks after the historic win, lawn darts were banned in the United States because so many children had been maimed by flying, weighted shards of pointed metal. One month after they were banned, Pizza Bucket Hut shuttered. Coincidence? Perhaps, but many folks say that the loss of the competition followed so soon by the banishment of his beloved lawn darts was too much for Pizza Bucket Hut’s owner, Billy Bingelow.

The prized trophy sat inside its glass vault for decades, a reminder of what once was. Over time, as employees left Doug’s Donuts Diner, fewer people remembered the event, and even fewer cared about it at all.

“What’s that old dusty trophy for, anyway?” asked Lucille, the newest waitress at the diner.

“Oh, good lord, some stupid tournament from the 1980s,” replied Betty May. “I started working here right after they won it and you’d think they won the gosh darn Olympics when really it was just lawn darts.”

Lucille was visibly surprised. “Lawn darts? Those things were awful! I have a one-eyed cousin who was injured playing lawn darts. They are pure evil.”

“My God, your poor cousin…What an awful way to lose an eye,” said Betty May.

“Oh, she was born that way. The lawn dart just punctured her left foot. Went right through her sandal, bless her heart. So why’s the trophy still here?”

“I’ll tell you why it’s still here,” a loud booming voice bellowed out from the kitchen.

Rusty was the fry cook at Doug’s Donuts Diner and was team captain on that glorious day they came home with the lawn dart trophy.

“That trophy represents everything! Back in August of 1988, we here at Doug’s weren’t just co-workers. We were a team. We were a family. We cared about each other and when we beat those assholes at the Pizza Bucket Hut, it meant that everyone in this town knew how strong a bond we had. It took lawn darts to teach me the value of camaraderie and there’s not a day that goes by that I don’t look at the trophy, wipe a tear from eye and thank God in heaven for giving me that lesson.” He walked over to face Lucille, his beer belly a few inches away from the apron tied around her waist, and glared at her. “You gotta problem with that trophy?”

“Well, it seems kinda crazy that we got this trophy here all in spotlights and it’s for a sport that injured thousands of kids and killed so many people. My one-eyed cousin probably wouldn’t appreciate seeing that trophy there. I mean, maybe it’s time for it to go so we can put something else on that revolving pedestal.”

Betty May, sensing that things could go very wrong at any minute, stepped in between the two, but Rusty shoved her out of the way.

“What could possibly be more important than my lawn dart trophy??” he wanted to know.

“Well,” said Lucille. “How about that plaque we got last week from the newspaper for Best Meatloaf? That’s something that all of us can relate to now. Lawn darts are a thing of the past but meatloaf is our future, Rusty.”

“If we move the trophy somewhere else, is that going to make you forget about how you felt when you won it? Does that outdated relic of the past need to have a spotlight on it in order for you to remember your history? That just seems silly to me. If my cousin came here and saw that trophy with her one good eye, it would remind her of a dark day in her history. Is your history more important than hers? The Best Meatloaf plaque can be something we can all take part in, customers and co-workers alike, Rusty.”

He stood there, shell-shocked that someone wanted to take away his lawn dart trophy, but then her words sunk in. He realized that times change and what was once important to a lot of people might not be as relevant anymore. She was right. He would never forget the joy he felt on that late summer day when he and his co-workers threw sharp pieces of metal through the air and ended up winning a trophy for it. His memories were forever with him and it didn’t matter where the trophy was. Lucille was right. He smiled at her, not realizing yet that at that very moment he was creating a new memory with a new co-worker.

“Thanks,” he told her. “Why don’t you go get that Best Meatloaf plaque and I’ll take the trophy out of its case. Maybe lawn darts weren’t the smartest thing in the world, but at the time it seemed alright, you know?”

Lucile smiled at him. “But meatloaf is forever, huh, Rusty?”

6 thoughts on “Lawn Darts Are Out/Meatloaf is In”