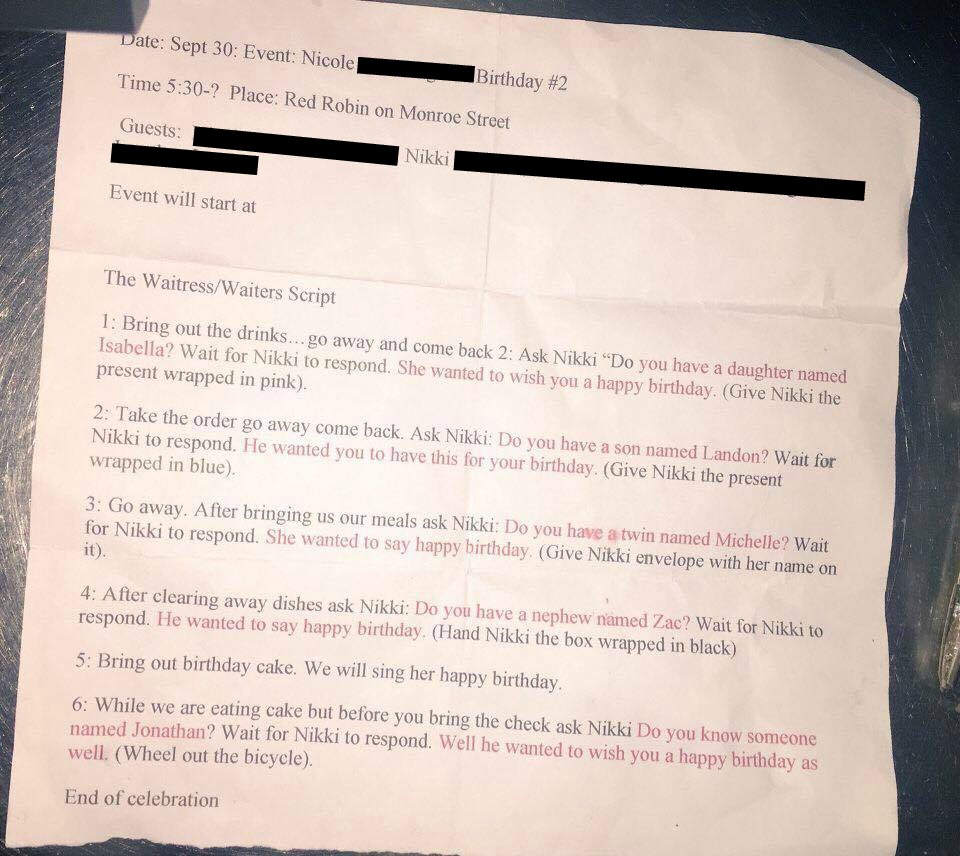 We all know the stereotype that says every waiter and waitress is an actor, right? While this may be more likely in New York City where you can’t throw a dead rat without hitting at least two wannabe Broadway superstars, that may not be the case all over the country. However, one recent customer at a Red Robin seems to think it’s perfectly okay to supply their server with a script for their dining experience and have the server perform like a trained monkey working for peanuts and belly rubs.

Nikki was living her best life by celebrating her birthday at Red Robin where she was going to drown herself in Chili Chili™Cheeseburgers and bottomless fries. Her friend put together the evening and had it planned down to the very minute. I’m certain that if Nikki needed to take a pee, she had to ask her friend first if it was on the schedule. The server was given an itinerary, complete with lines of dialogue and so the party began:

1: Bring out the drinks…go away and come back 2: Ask Nikki “Do you have a daughter named Isabella? Wait for Nikki to respond. She wanted to wish you a happy birthday. (Give Nikki the present wrapped in pink).

2: Take the order go away and come back. Ask Nikki: Do you have a son named Landon? Wait for Nikki to respond. He wanted you to have this for your birthday. (Give Nikki the present wrapped in blue).

3: Go away. After bringing us our meals ask Nikki: Do you have a twin named Michelle? Wait for Nikki to respond. She wanted to say happy birthday. (Give Nikki envelope with her name on it).

4: After clearing away dishes ask Nikki: Do you have a nephew named Zac? Wait for Nikki to respond. He wanted to say happy birthday. (Hand Nikki the box wrapped in black).

5: Bring out birthday cake. We will sing her happy birthday.

6: While we are eating cake but before you bring the check ask Nikki Do you know someone named Jonathan? Wait for Nikki to respond. Well he wanted to wish you a happy birthday as well. (Wheel out bicycle).

At certain intervals, the server was required to ask Nikki about a random person in her life and when Nikki responded, “Why yes, I DO have a daughter named Isabella!” that was the server’s cue to say ‘“she wanted to wish you a happy birthday” and then present the appropriate gift. The server and to do this a total of five times for Nikki’s son, her twin sister, her nephew and a random man named Jonathan. We do not know what Jonathan’s relationship is to Nikki, but I’m just going to assume it’s her fuck buddy because why not? This poor server had to carry out a pink present, a blue present, an envelope, a black present and finally, a goddamn bicycle. Of course these gifts were taking up valuable space in the sidestand and the whole event was taking up even more valuable space in the server’s brain. Every time she’d be at another table taking an order, she’s worried about getting Landon’s present out on time.

I think this is a lot to ask of a server. You can’t just expect your waitress to be handed a script and perform on cue. I especially love how she is told each time to wait for Nikki to respond, like they think the waitress won’t be able to contain her excitement and will hand out a present before Nikki says she knows who Michelle is.

The rudest part of the “script” is how many times the server is simply told to “go away.” Trust me, the server can’t wait to go away. And she can’t wait for Nikki to go away either. A Red Robin waitress isn’t your own personal event planner. I hope Nikki reached into that envelope from her twin sister Michelle and handed some extra bills to the server for going above and beyond.

I guess the real question here is who the hell was even at this “celebration?” Nikki’s own children, Isabella and Landon, couldn’t be bothered to show up. Her twin sister must have been too busy celebrating her own birthday at a Denny’s down the street. Her nephew Zac phoned it in with a present he wrapped in black and everyone knows that when you wrap a birthday present in black, it means you don’t give a shit and you’ve got better things to do. And even this “someone named Jonathan” didn’t show up. He managed to get a freaking bicycle down to Red Robin but he wasn’t able to stick around to wheel it out himself? C’mon, Jonathan. What kind of a fuck buddy are you?

We cannot be sure how successful this party was. The photo was sent to me with very little explanation and I was forced to create the details on my own. What we can be sure of is this: