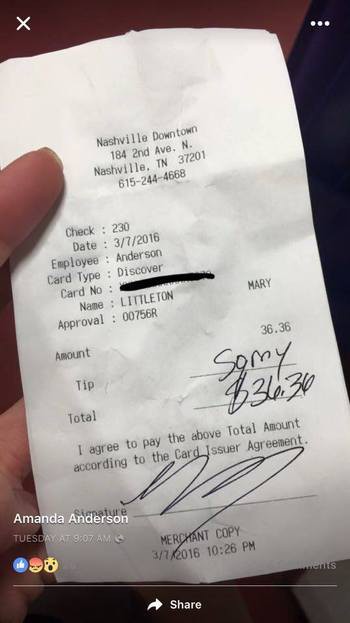 Republican Tennessee State Rep. Mary Littleton, was unhappy with the service at a restaurant and stiffed her waitress. Of course the waitress took a photo of the credit card receipt and then it went viral. Ms. Littleton released a statement about the event:

“Everyone has had a bad experience with service at some point when dining out at a restaurant. It is unfortunate that my private note to the server regarding the quality of service in this instance was made public. Due to the overall experience that evening, I decided not to provide a tip. In hindsight, rather than writing a note on the receipt, I should have asked for the manager so that I could register my concerns with the quality and promptness of service. As the mother of someone who has been a server, I know that servers have difficult and demanding jobs and, as such, it is has always been especially important to me that I make sure to tip generously when I receive good service.”

That’s all well and good, but I have the real story:

Once upon a time a republican state representative from Tennessee named Mary Littleton decided she wanted to go out and have lunch.

“Hmmm, where I can I get me some fried pickles and Lots-a-Tots® all served in a classy environment where the waitresses will be wearing tight orange shorts and teeny-tiny t-shirts?”

A light bulb went off in her head, providing the first bit of brightness in that deep dark skull since she went into office in January of 2013.

“I’m gonna go to Hooters!” she yelled! “Roberta, make me a reservation for Hooter’s,” she screamed at her secretary who already had Hooters on speed dial.

Fast-forward an hour and a half later and Mary is sitting at a table with a plate of Original Hooters Style Buffalo Wings, her face covered in sauce and her waitress once again trying to offer her some napkins.

“I don’t need no napkins,” Mary growled. “That’s what this here tongue is for!” And with that, her enormously long tongue came out of her mouth and she licked her face clean from her forehead down to her chin. “Bring me another bucket of sauce and a order of them chili cheese fries and make it snappy!” She then belched with great authority; a belch so low and deep that the vibrations of it were felt two tables away.

By this point, the waitress was quite disgusted by her customer. “Who the fuck is that?” she asked her manager. “She’s like an animal. And did you see her tongue? Did she grow up next to a nuclear reactor or something because that is not normal.”

“Oh that’s Mary Littleton. She’s our state representative. Isn’t she exactly who you want representing you?”

They both looked over at Mary who was lapping up her beer like a dehydrated dog and somehow, farting and belching at the same time.

“Well, she’s grossing me out,” said the waitress. “I don’t think I can get near her anymore because she is seriously about to make me throw up. After I drop off these fries, I’m done with her. She’s too fucking nasty.”

As she placed the order of chili cheese fries onto the table, along with the check, the waitress saw Mary blow a snot rocket directly onto the floor. She noticed that a booger landed on Mary’s sensible black pump while a string of snot hung from her nose to her right tit. Once again, the gigantic tongue made an appearance, moving like a single giant windshield wiper across her face and cleaning away wing sauce, snot and what appeared to be a few crumbs from a donut that Mary had eaten for breakfast.

The waitress could take no more. She went to the bathroom, violently ill ,and there she remained until the feeling of nausea had passed over her.

While she was in the restroom. another waitress ran Mary’s check. As Mary signed her credit card, she hovered at the tip line, questioning if she should leave her usual 8% tip.

“Well, I ain’t even seen this waitress for a good 10 or 15 minutes and not once did she offer me a napkin. The wings didn’t have enough sauce and I think she threw a booger on my good pumps. This service is horrible!”

And with that, she wrote the word “sorry” onto the tip line and left the restaurant, leaving behind a pile of bones, snot on the floor and a stinky wet spot on her chair that may or may not have been vaginal sweat. 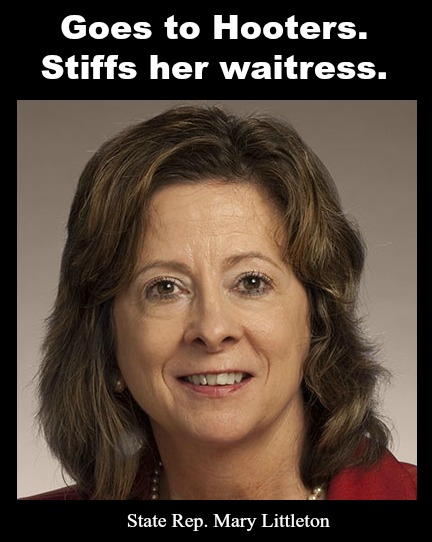