2016 continues to be the year that restaurant owners are making Yelp their bitch. It’s almost like owners across the country have collectively agreed to stand up to the Yelpers and make sure that other people know when a review is unjustified. Such is the case with a restaurant called Milestone in El Dorado, California when a woman named Gretchen V. sharted up a review on Yelp about what she perceived to be a less-than-ideal dinner experience. Gretchen V. was so displeased with her Steak Diane that she lost all ability to form correct sentences and forgot what punctuation is, because reading parts of her review is like trying to decipher hieroglyphics with the Rosetta Stone. 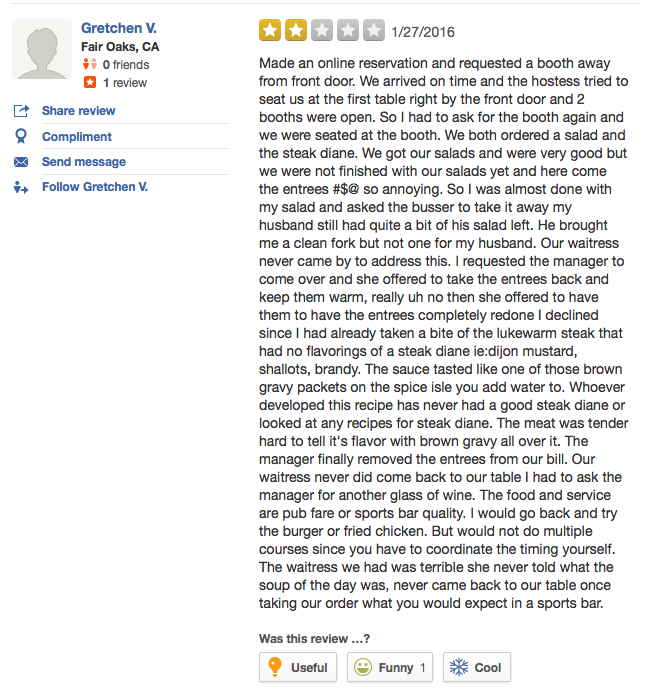 The first time she got her panties in a twist (like she wears ‘em) was when her entree came out before she finished her salad. The horror! Even though the manager offered to keep the plates warm in the kitchen Gretchen V. refused and then when she thought the steak was only lukewarm and they offered to remake the dinner, she refused again. We all know why she refused: because then she wouldn’t have anything to complain about. Gretchen V. also complained that her waitress never came back to check on her and was still unsatisfied even when the entrees were taken off the bill.

Enter Nick D., the business owner who is going to explain to Gretchen V. what is wrong with her review. “Your service will, more often than not, be a reflection of your own attitude and energy,” he tells her and the she just doesn’t “get it.” He also tells her that after it was clear that Gretchen was never going to be satisfied (“Tell me about it,” says Gretchen’s husband), the waitress (and everyone else) was told to simply ignore the table and use the positive attention on people in the restaurant who were happy to be there. 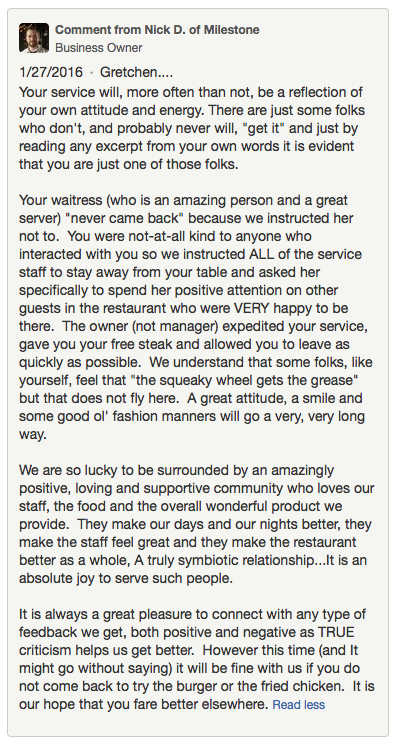 I kinda love that he instructed all the service staff to avoid her table which was probably pretty easy to do, what with the overwhelming stench of vinegar that was probably emanating from her every orifice. He also straight out tells her she is “not at all kind” which, in my experience may or may not be corporate speak for “you are a miserable person.” Finally, he tells her that, although she would be willing to come back to try the burger or the fried chicken, to not bother.

Bravo, Nick D., bravo. Why shouldn’t business owners defend their online reputation? Milestone has great reviews on Yelp and he wants anyone who sees her shitty two-star review to understand that the problem was with her and not the restaurant. If this is the new trend for Yelp, I am all for it. Here is Milestone’s Facebook page in case you want to pop over and say hello. I’m sure they’d love to hear from you.

As for Gretchen V., I suggest she saves her complaints for big corporate restaurant chains who are more than willing to jump through hoops and bend over backwards in effort to please a bitch. If she complains on the right Facebook page, maybe she’ll even get a coupon for a free dessert from Applebee’s.