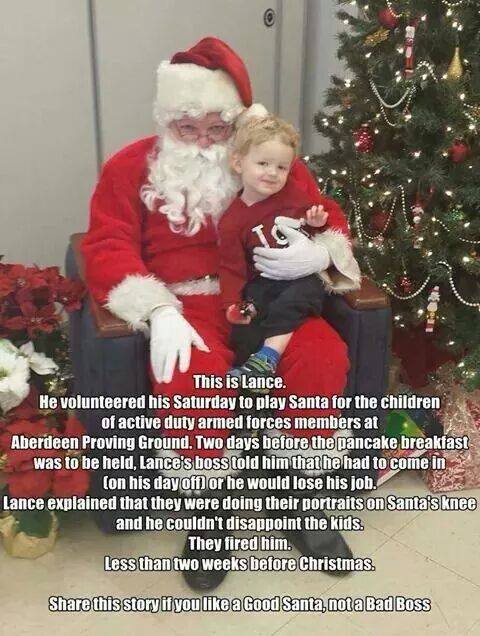 The Grinch who stole Christmas no longer has to be alone his cave with nothing to do but curse Whoville and wait for summer, because the Internet has found his soul mate. Her name is Alice and she works at Bowman’s Butcher Shop in Aberdeen, Maryland. Bitchy Waiter reader Lance Bankerd worked for Alice for four months while he was in between acting jobs and his next restaurant gig. All was well and good with the pair until one day last week when Alice’s true Grinchiness spotted a hole in her panties, squeezed its way out of her ass and left a shart stain on the spirit known as Christmas.

This past Thursday, I mentioned to my boss that I was playing Santa Claus for the children of Active Duty military parents in Aberdeen Proving Ground in Harford County, Maryland. My sister-in-law planned the event and tickets have been sold for some time. The kids all got to eat pancakes, hear me read stories, and get their pictures taken with me. All proceeds benefit the base’s childcare center, my sister-in-law and I are both volunteers. My boss reacted by telling me that she wanted me to work on Saturday.
Again, this was Thursday, two days before the Saturday she wanted me to work. I explained my situation. These plans were made months in advance and it was impossible to cancel last minute with out causing tears and making a good cause lose money. I have never worked on a Saturday in all of the time I worked there. In fact, I was hired to only work Monday-Thursdays and somewhere along the line they started making me come in on Fridays. (Frankly, I needed the money so I just rolled with it.) After I explained she responded with an ultimatum:

Show up on Saturday OR lose my job.

I explained that this was impossible. I made a commitment, on my day off, to children, at Christmas. I couldn’t cancel on them two days before they would be taking their Christmas pictures on my lap. So, she fired me. On the spot. Less than two weeks before Christmas. Because, I was playing Santa for kids on my day off.

The worst part is; I really loved my job and I thought that my boss and I were friends.

Now, I have had some mean bosses in my time, but this Alice takes the cake. (It’s probably a cake made of baker’s chocolate, stale trail mix and turds.) She is going to fire someone two weeks before Christmas for doing something on his scheduled day off? I spoke with Lance and know that his wife is in school and the paycheck he was getting from the butcher shop was what was sustaining them. He is now unemployed while Alice is currently making plans to move in with the Grinch and make him get rid of his black leather couch because it looks too “bachelor pad in here.”

Lance’s sister-in-law has started a donation page to help him and his wife stay on their feet as he searches for another job. We all know how difficult it is to get a job at this time of year, but it’s especially hard to find a restaurant job now. No manager is going to hire a server two weeks before the slowest time of year. If you want to do a good deed, click here to donate. Or if you are in the Maryland area and know of a job for Lance, leave a comment below so that Lance can reach out to you.

As for Bowman’s Butcher Shop and Alice the Grinch, I hope they are happy with their decision to fire a person who was trying to do something nice for the world. Lance may be without a job, but we all know that he has something they don’t: a soul. Someone who sacrifices their time to do things for others will always win out in the end.

Here is what you can do:

-Leave a comment below for Lance to let him know he has supporters around the world.
–Donate $5 to Lance and his wife.
-Share this, so everyone will know that it’s not right to be punished just because you want to do something nice for someone.