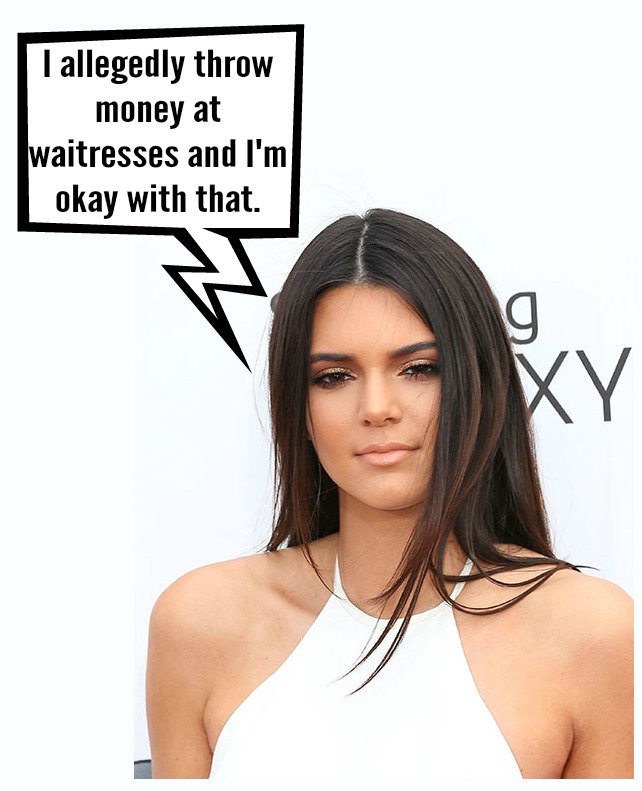 Forgive me. In the over five years I have been writing this blog, I cannot remember a time I ever wrote about a Kardashian, but I am about to do that right now. I feel the same way about all things Kardashian as I do about empty bottles of vodka which is a combination of sorrow and disgust. Over the last couple of days, lots of people have been sending me this story about Kendall Jenner who allegedly threw a bunch of money in a waitress’ face after the 18-year old fame-whore got pissed off about not being served alcohol. Technically, this girl is not a Kardashian, but she is close enough to being one and just by writing about her, I have soiled the good name of this blog. (Please, this blog was a soiled mess to begin with…)

According to Page Six, Kendall went to Mercer Kitchen in SoHo and wanted a cocktail. Of course the waitress, Blaine Morris, didn’t serve her because the bitch is only 18 years old. Kendall was with her bestie, Hailey Baldwin (I don’t know who she is, but I can only assume she’s related to one of those acting Baldwins…) and after they were refused the sweet nectar, they got up to leave without paying their $60 bill for the food or without leaving a tip. When the waitress chased them down, it is said that “Kendall took a couple of $20 bills out of her wallet, threw them at the server and walked away.”

Since nothing really matters unless it is Tweeted or Instagrammed, the waitress Tweeted out “That horrible moment you chase a Kardashian down the street because she forgot to pay her bill to be thrown money in your face.” I went to Blaine Morris’ Twitter account but the Tweet has been deleted. I am trying to reach out to talk to her, but I’m pretty sure that since the story is on Huffington Post, E! and every other online site, she doesn’t give two shits about lil’ ol’ me.

Kendall has gone to her Twitter account to deny the exchange and Hailey’s rep (really? she has a rep?) has farted out a a statement that pretty much says it’s all untrue and it was a misunderstanding. Who to believe? Who to believe?

It’s not that hard to think that someone who grew up around the warped values of the Kardashian household would feel entitled enough to expect some server to risk her job by serving alcohol to a minor. It’s also pretty easy to believe that a spoiled bitch who has as much disposable income as Kendall Jenner would simply toss money at “the help” and see nothing wrong with it. Why can’t Kendall get her liquor like every other 18 year-old does and ask someone to buy it for her in front of the 7-11? Or sneak into her sister’s room, step over the thongs, sex toys, cell phones and mirrors and steal some of her’s? Kendall may be rich and famous, but the bitch ain’t 21 so she’s just going to have to get in line behind Justin Bieber and wait a few more years before she can start terrorizing cocktail lounges around the world.

We may never know the truth about this story. I think the waitress is going to remain tight-lipped (which, by the way, is the opposite of all Kardashians) about the whole incident since the waitress is an actress who has actual credits on IMDB. It’s scary to think that we may live in a world where bad-mouthing a Kardashian can get you blacklisted, but a Kardashian can get famous for badly mouthing a list of black dicks. I also wonder if the waitress was in trouble with any social media policy that she may have violated at her job. If that’s the case, I don’t expect to hear much more about this story. If I should hear from Blaine Morris, and I totally won’t, I will let you know.

Meanwhile, I would love to have an Internet feud with Kendall Jenner. That would be fun.

7 thoughts on “Did Kendall Jenner Throw Money at a Waitress? Probably…”