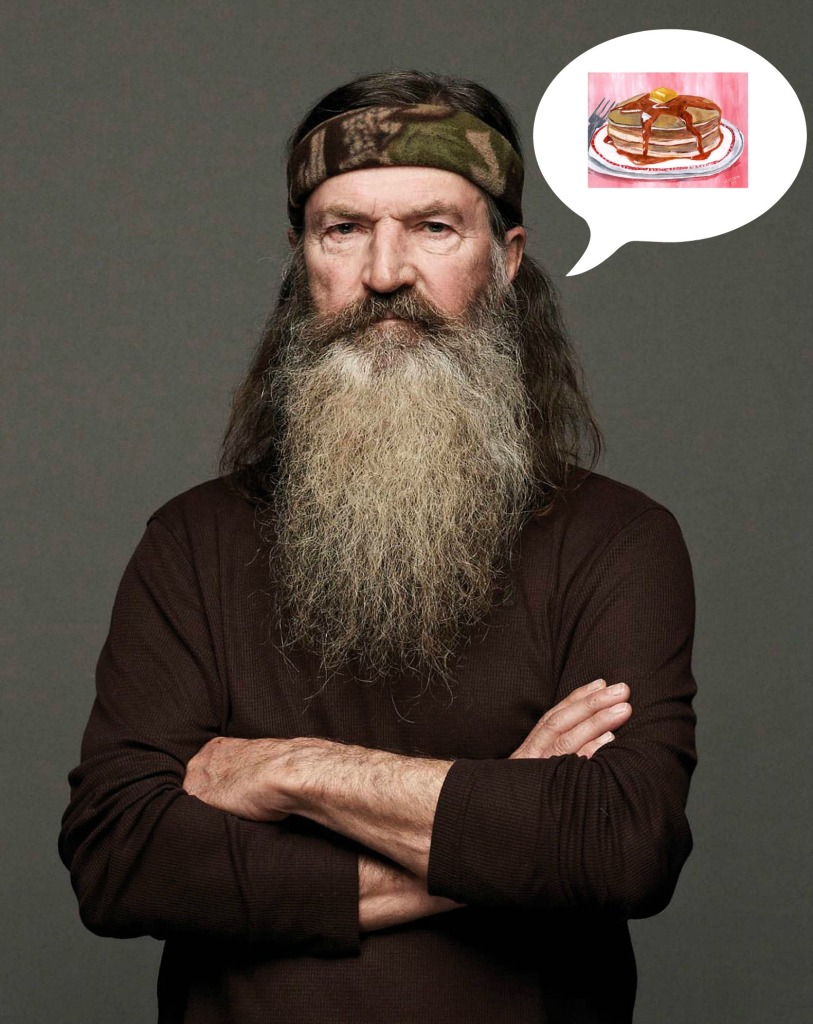 Unless you live under a rock, you have probably heard by now that Phil Robertson from A&E’s Duck Dynasty is on a suspension from his hit TV show for stating his opinion in an interview with GQ. Let’s not even begin to wonder why GQ wanted to interview a man who dresses mostly in camouflage and looks like he buys the rest of his clothes at a Wal-Mart fire sale. In the interview, Phil dropped a bunch of homophobic and racist words while standing behind a veil of Christianity. I won’t go into that, because it’s been said over and over again but you can go to GQ to read the article. Once the public got a hold of his opinions, people revolted and A&E dropped his bearded-ass faster than the Food Network punted Paula Deen down a butter slide when she said some rather insensitive things earlier this year about race. Since Duck Dynasty has a huge following with millions of viewers each week, he had lots of fans who were ready to stand up in his defense. One of those supporters was Sarah Palin who, as we all know, has to grab onto anything at all in an attempt to stay relevant, or at least stay in the news. She went straight to her Facebook page and said, “Free speech is an endangered species. Those ‘intolerants’ hatin’ and taking on the Duck Dynasty patriarch for voicing his personal opinion are taking on all of us.” She also shat out “Christians have a right too! I support you Phil” and “Christians needs to stand up for the word of GOD.” She seems to think that A&E is trampling on his right to free speech. She didn’t seem to think that earlier this month when Martin Bashir of MSNBC said  that someone should take a dump in her mouth. No, when someone says something bad about her, that person should be fired and who cares about his right to state his opinion? He ended up resigning over the whole matter.

I know very little about Duck Dynasty and even less about Phil Robertson, so what I am about to say may surprise you: He can say whatever he wants. Say it loud, say it proud.

The thing is though, you have to be prepared for the consequences. You can be an ignorant prick and say stupid shit all the live long day, but you have to realize that some people aren’t going to agree with you and in some cases you might even lose your job over it. On this blog, I say whatever I want. Some people don’t like it and they will email to tell me what an idiot I am or how small-minded I am. It’s my opinion and when I put it out there, I know that it is very possible that some people are going to be pissed off about it. If they don’t like what I stand for, then all they have to do is click away from this blog. Can’t people do that with Duck Dynasty too? If viewers know that Phil Robertson thinks that homosexuality leads right into bestiality, they can decide if his TV show is one they want to watch, right? By the way, A&E knows that he is a big moneymaker for them which is probably why they just put him on a suspension rather than fire him outright. He’ll probably be back within a few months.

A few years ago, I was writing blogs posts about a new job. No one at the restaurant knew about it and I never mentioned the names of any co-workers or the place I was working. One day, someone randomly read the blog and realized that what they were reading about had just happened at their job. They out two and two together and I was soon outed and fired. I never thought I should have been fired for expressing my opinion about people I worked with, especially since I never told them about it and never called them out by name. If I feel like I was unjustly fired for expressing my right to “freedom of speech,” then by that same argument, wouldn’t I have to say that Phil Robertson should get to keep his job too? How can I understand the plight of this asshole from Duck Dynasty? How can we be so different and yet experience the same thing? If he wants to, he can talk about the “sins” of gay people and how the African-Americans he grew up with under the Jim Crowe laws were all so happy, but maybe the consequence would be that his show slowly loses steam and is finally canceled because people make their own choice that they don’t want to support a bigoted racist asshole who needs goddamn razor. I suppose every employer has a right to fire an employee when the employee can possibly affect business. In my case, I wasn’t. In Phil’s, yeah, he probably is.

Yes, I am saying that our politically correct climate is more fucked up than the 66° weather that is predicted for New York City three days before Christmas. Do I agree with what he said? Oh, hell no. Will I support his show? Again, hell no. But he can say whatever he wants. However, once he says it, he has to prepare himself for people to turn off his show, stop buying his products and stop being an audience for his nonsense. Why don’t we let the public decide how they want to respond to him?

I cannot believe I am kind of agreeing with Sarah Palin. I just wish Martin Bashir would come back to MSNBC and say he has decided that he too has a right to his opinion. And then he can take a dump in Sarah Palin’s mouth. I’d totally watch that.