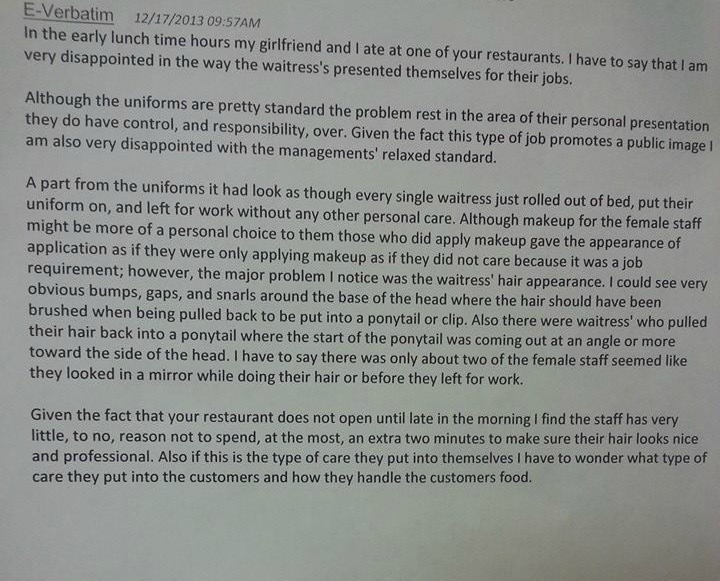 Anyone who works with the public and deals with customer service has probably heard a complaint about themselves at one time or another. It is a fact of life that no matter how you do your job, someone will be dissatisfied with your effort. Complaint letters are a dime a dozen but every once in a while, one makes its presence known that is too good to not share with others. Thank you to the anonymous soul who sent me a copy of a letter that made its way to the manger at an Olive Garden. Some people have lots and lots of free time and with all that extra time to fill, they use it to create long-winded and poorly written complaint letters. ( I do the same exact thing but call it “blogging.”) This letter is hilarious and I feel it must dissected line by line, ignoring the non-use of subject/verb agreement, the lack of a consistent tense and overall bad grammar. I will only tackle the ideas of the letter and nothing else.

In the early lunch time hours my girlfriend and I ate at one of your restaurants. We do not know if this was written by a man or woman, but we do know that they ate in the “early lunch time hours,” which I presume to be somewhere between 11:42 and 11:57 AM. For the sake of this blog post, let’s assume the letter came from a man named Bob and they ate at 11:46.

I have to say that I am very disappointed in the way the waitress’s presented themselves for their jobs. Uh oh, poor Bob is disappointed.

Although the uniforms are pretty standard the problem rest in the area of their personal presentation they do have control, and responsibility, over. It’s been a while since I have been to an Olive Garden, but I assume their uniforms are the standard khaki or black pants with an Olive Garden shirt. Maybe Bob was hoping for something more akin to the Hooters uniform of short shorts and boobies but it seems that he is more upset with physical appearance than anything else.

Given the fact this type of job promotes a public image I am also very disappointed with the managements’ relaxed standard. Again, Bob is expressing his disappointment, this time with management for not making sure that the staff is living up to  expectations. So far, Bob seems reasonable, albeit a little petty.

A part from the uniforms it had look as though every single waitress just rolled out of bed, put their uniform on, and left for work without any personal care.  Now we can see that Bob is getting a little bit more specific. He is upset that “every single waitress” looks like crap on a cracker. He wants his servers to get up early and make sure they put lots of time into their personal appearance. After all, don’t we just know that Bob has an hour-long beauty regime every morning before he leaves his house? He buffs his greasy head 100 times with a Shamwow Towel and then he combs his soul patch with a brush he made himself out of an old broom and a razor. He uses a match to get rid of the extra hair that grows on his shoulders and he wears two layers of Spanx for men. It takes him a while, but he looks good when he leaves his house. Or at least as good as Bob can look.

Although makeup for the female staff might be more of a personal choice to them those who did apply makeup gave the appearance of application as if they were only applying makeup as if they did not care because it was a job requirement; Oh, I get it, they need makeup! Some didn’t wear any makeup at all and those who did looked like they put it on in the car on their way to work. Newsflash, Bob: they put it on in the car on their way to work.  I’m sure Olive Garden doesn’t have a requirement that they wear makeup. (Personal note: in 1990, I was wearing makeup at work to cover a big zit on my forehead. One of my customers called me out on it and I told them that the manager required me to wear it so that customers wouldn’t see my big zit when they were ordering nachos. Yeah, I lied to hide my vanity. Of course Bennigans’s didn’t make me wear makeup.)

However, the major problem I notice was the waitress’ hair appearance. I could see very obvious bumps, gaps, and snarls around the base of the head where the hair should have been brushed when being pulled back to be out in a ponytail or clip. Wait, is Bob a fucking hair stylist now? Is he really judging how well someone combed their fucking hair? Watching a marathon of Tabitha’s Salon Takeover does not make you an expert on hair. And what the fuck is a “snarl” anyway? Is that like a cowlick in a bad mood?

Also there were waitress’ who pulled their hair back into a ponytail where the start of the ponytail was coming out at an angle or more toward the side of the head. Oh, hell no! Now Bob is trying to put down the world-famous 1980’s side ponytail. There ain’t nothing wrong with a good ol’ side ponytail, Bob. 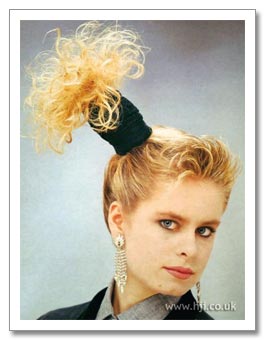 Fuck you, Bob. I can work a side ponytail.

I have to say there was only about two of the female staff seemed like they looked in a mirror while doing their hair or before they left for work. Well, earlier he said something about “every single waitress” but now he is singling two of them out who may have looked in a mirror that morning. I bet all of them looked in the mirror before leaving for work and most of them had this to say when they saw their reflection: “Oh who fucking cares? It’s Olive Garden, who am I trying to impress? That loser Bob and his skank-ass girlfriend?”

Given the fact that your restaurant does not open until late in the morning I find the staff has very little, to no, reason not to spend, at the most, an extra two minutes to make sure the hair looks nice and professional. Now Bob thinks that he knows what time people should be getting up in the morning? What if the waitress closed the night before and she had a table that took the Never Ending Pasta Bowl too seriously? She was at work until 2:00 AM and then had to drive home, wind down, eat some dinner and catch up on Project Runway All-Stars all before having to get some sleep to open the damn Olive Garden again the next morning. Maybe those two minutes you think she should have used to make her hair look nice and professional were put to better use by pushing the fucking snooze button, Bob.

Thank you for sending this letter to me, Anonymous. And thank you to Bob for writing this wonderful letter of complaint. I’m sure everyone at Olive Garden really took it to heart. I bet they all went home that night and practiced hair and makeup on one of those Barbie heads so that when they got to work the next day they all looked like they were about to step in front of a camera for Glamour Shots.

Please share this so that maybe someday “Bob” will see how seriously his letter was taken. 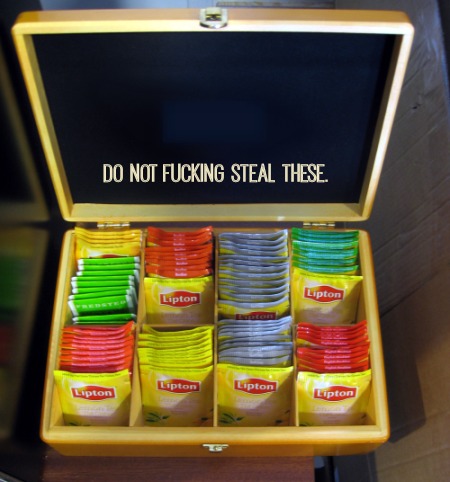