Having been a waiter since the dawn of time, it is very difficult for me to go into a restaurant and completely enjoy myself. Too often, I am watching to see how the restaurant is being run or trying too hard to accommodate my server and make thinks easier for him. When I go out in a large group, it’s even worse. I get a serious case of angina because I know how difficult large parties can be for a server. Not all large parties, just some. I have been chastised on this blog before for writing rules for customers so they can make it easier for their server. Today, however, I am going to write some rules for customers that will make it easier on themselves. Specifically, when you go out to dinner as part of a large group.

We’ve all been there. It’s your friend’s cousin’s boyfriend’s birthday and you suddenly find yourself at a restaurant in a party of twenty-five people. They have pushed twelve tables together and you are sitting between a lady you have never seen before and another lady you never want to see again. The one person you know is sitting at the other end of the table and you hear the waitress say, “Sorry, we don’t do separate checks.” You are overcome with panic and fear, sweat dripping off your nose, as you begin to wonder how in the hell you are going to deal with the check when it makes it to the table. If it’s like every other time you have been in this situation, the last person to hold the check is going to get screwed and you don’t want to have to pay extra because someone else doesn’t know how to divvy up a check. Relax. I’ve got you covered. Keep these things in mind the next time you are going to be at a restaurant in a  large group.

I truly believe if you keep these rules handy, you will not totally hate the next time you are in this situation, or at least you won’t hate the paying of the check. You will still hate that a booze hound with crazy fucked up hair is sucking all the attention out of the room but please give him a break. He’s not that bad. He’s insecure and if you pay close attention, he is taking notes for a future blog post. 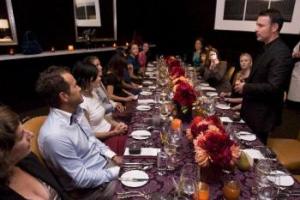