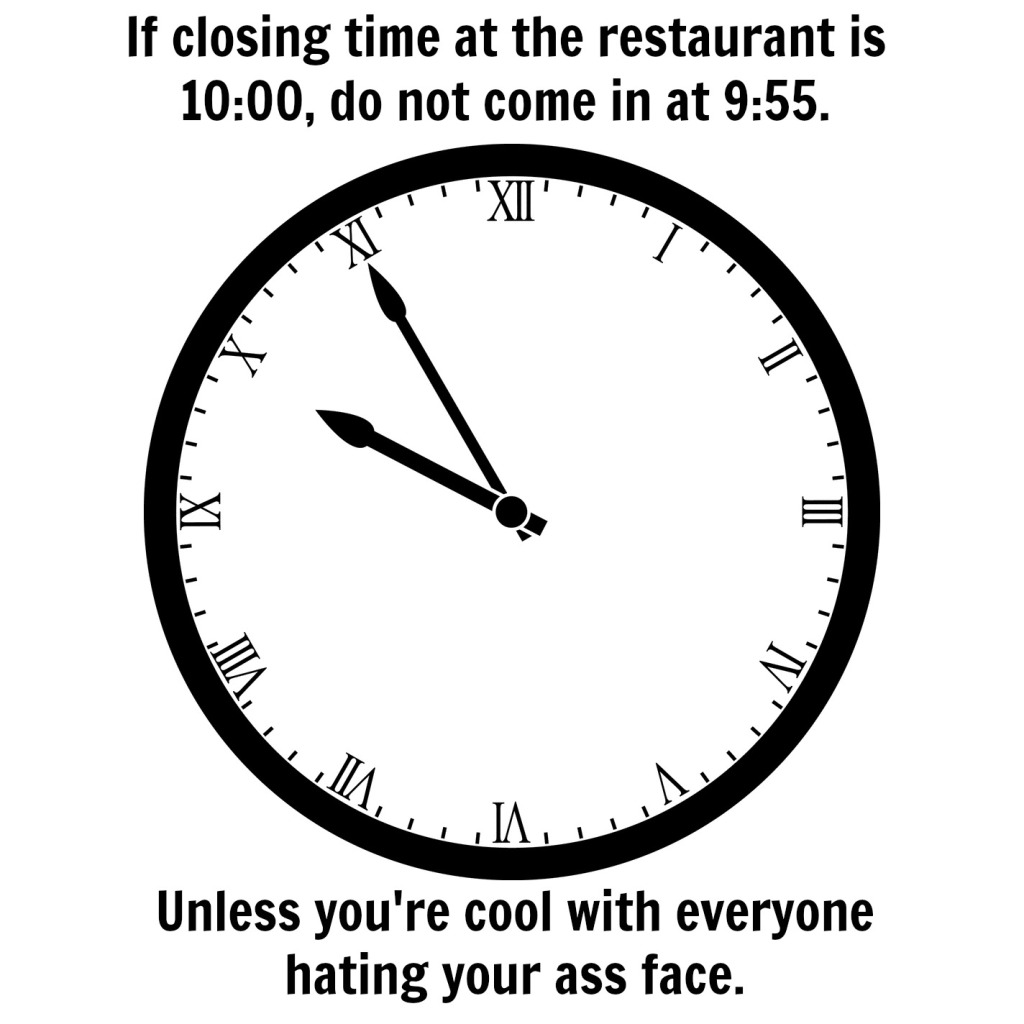 Some days I have no idea what I am going to blog about which is pretty evident nine times out of ten. Honestly, I am aware that this blog is basically about five different topics over and over again, so let’s rehash another one right now: closing times at restaurants. When I ever-so-innocently posted the above photo onto my Facebook page I had no idea that it would create such hostility. ( I totally did and that’s why I posted it.)

Simply stated, I feel that if a restaurant closes at 10:00 and a customer chooses to come in at 9:55, there is a very good chance that the staff is going to be disappointed. I didn’t say the staff would escort you out or that they would rub their genitals against your bread before placing it at your table, I just said they would probably hate your ass face. Would they tell you they hate your ass face? Of course not. They would smile right at your ass face and give your ass face the service they need to give, albeit a little mores brisk than usual. Yes, the restaurant is open until 10:00 and I understand that we won’t be walking out the door at 10:01. However, no server wants to see a table of four meander in and sit down five minutes before closing time and then chit chat for twenty fucking minutes before even cracking the menu open. Some people use the argument that “You’re open until 10:00 and I got here just in time.” Therefore, I can use the argument, “It’s 10:01 and we are closed now so I am going to start mopping, vacuuming and blowing out candles even though you haven’t even gotten your beverages yet.” That’s a fair trade, right? I mean, we’re closed now so you don’t mind if I roll this bucket of bleach water over here and scrub that booth next to you, do you?

The Facebook page generated some pretty harsh comments. I always love when that happens because I have no life and it gives me something to read all day.

Thomas says: I’m sorry I don’t give a crap if I come in at 9:55. You want to work as a god damn waiter/waitress get with the program, it’s a work hazard (means it comes with the job)… You don’t like it, go find a new job but you will probably bitch about something else at that job too. Self entitled cry babies.

You’re right, Thomas, it is a work hazard. In fact, I think I deal with more dicks and assholes than a gay porn star. You are also right when you say that if I found a new job, I would probably bitch about something else. It’s what people do, Thomas; they complain about their jobs. No one has a job that is perfect. I have heard movie stars complain in interviews that their hours are so long and so hard. They make millions of dollars and they still complain. It’s human nature. Oh, and also, it’s called Bitchy Waiter so get the fuck over it.

Thomas goes on to say: And whose keeping a whole staff? You are keeping the people who serve you and cool your food ain’t 10 servers waiting for me to finish my food just the one, whose going to get a nice tip

Heather, that’s great, but what is the point of a closing time if you tell customers to come in whenever they feel like it? Today they come in ten minutes after closing and then tomorrow they’ll come in twenty minutes after closing. Where does it end? And do your servers like you or do they just pretend to?

Michael says: Holy fuck! I’m a poker dealer. Do you know how many times I’ve had to pull a 16 hr shift bc ppl were still playing? Or how about oilfield workers who work 24 hrs straight when the well is down?

I find it hard to believe, Michael, that you have ever dealt poker from 10:00 in the morning until 2:00 AM. Are you the only poker dealer in your town? Do you not have shift changes? As for oilfield workers who work 24 hours straight, I’m pretty sure they are making a little more than $2.13 an hour. A waiter can get stuck with a late table for an extra hour or longer then get no tip making that extra time they worked absolutely useless.

My favorite comment comes from John who says: Perhaps a sign that says “we don’t close till 10, but YOU BETTER NOT COME IN AFTER 9:30.”

John, if you tell me where I can get that sign and then tell me of a restaurant owner who will let me put it on the door, that is where I want to work!

So, what are your thoughts on this? I expect some lively discussion in the comments section below. If a restaurant closes at 10:00, what is the latest time that you feel comfortable going in?